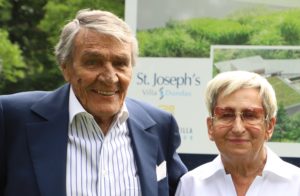 Margaret and Charles at Margaret’s Place Hospice groundbreaking in 2018

DUNDAS, ONTARIO – St. Joseph’s Villa & Foundation is saddened by the passing of Hamilton philanthropist Charles Juravinski. Charles passed away at Margaret’s Place, Hospice at St. Joseph’s Villa on February 16, 2022, at the age of 92.

Survived by his beloved wife Margaret, Charles leaves behind an unparalleled legacy of friendship and philanthropy in the Hamilton health care community, including St. Joseph’s Villa and Margaret’s Place Hospice.

His passing at Margaret’s Place Hospice comes six months after its opening; a hospice which is named after his wife, Margaret, in honour of their leadership gift. Their generous contribution of $2.8-million enabled St. Joseph’s Villa & Foundation to meet the critical needs for hospice care in our community and provide dignity at end of life.

“Charles strongly believed in the need for end-of-life care in our community,” says Don Davidson, President and CEO, St. Joseph’s Villa Foundation. “While we’re deeply saddened by the loss of our dear friend Charlie, we are honoured our hospice ­– the one he made possible – is the one that could care for him at the end of his life. It is only right that Charles could receive this compassionate care that he and Margaret made possible.”

In an interview with St. Joseph’s Villa Foundation in June 2021, Charles expressed the special place he held in his heart for hospice care.

“For a family to have a space where they can savour precious moments in their final journey together, I couldn’t think of any better way to give back to our community,” said Charles. “The hospice is named after my wife Margaret, but it’s a place for all Margarets and anyone else who needs it.”

The Juravinski’s support and friendship of St. Joseph’s Villa date back over 25 years to when they first encountered the Villa’s compassionate care as Margaret’s mother was a resident. Since then, they have been tenacious supporters of the Villa and have directly impacted thousands of lives who have come through the Villa’s Campus of Care.

“It’s wonderful how they have helped us serve the community” says John Woods, President & CEO, St. Joseph’s Villa. “Thanks to Charlie and Margaret, we have been able to address the needs of our community and grow a campus of care. This was the vision for their support and it touches many lives every day.”

“He was so kind, so full-hearted and his smile and personality could light up a room,” says Davidson. “It’s a true loss for our community, but we can take solace in the fact he lived a full, contented and inspiring life. Healthcare in Hamilton will forever be better because of him.”
–

Charles’ will forever be remembered as a kind man and a pillar of philanthropic excellence in our community. The Juravinski’s philanthropic work dates back nearly 26 years.

“I thought what better way to give back than to support a universal need,” said Charles in an interview with St. Joseph’s Villa Foundation last June. “Health care was the first to come to mind. It is something everyone can benefit from and really is the core of a society.”

In appreciation for the care Margaret’s mother received in her 10 years at St. Joseph’s Villa, they supported the Villa’s major redevelopment in 2002 with a $5-million gift.

“The $5-million gift was the largest gift ever made to a long-term care facility in Ontario at the time,” says Maureen Ellis, former President & CEO of St. Joseph’s Villa Foundation. “It was an example of true leadership and just the start of their many years of adamant support for the Villa.”

In 2016, Maureen Ellis brought the idea of building a hospice to Charles and Margaret. Their excitement was apparent, as only weeks earlier the couple had a conversation about the need for a hospice in the west end of Hamilton. The universe had listened, and it was an opportunity they felt was their calling.

The couple initially committed $1-million for the vision of a six-bed hospice, but when St. Joseph’s Villa re-envisioned the hospice to add four beds, they happily doubled their gift and encouraged their peers to follow suit. Nearly four years later, the Juravinskis saw their generosity come to fruition as the hospice opened its doors to serve the public in September 2021, and now, opened its doors to serve Charles in February 2022.

“Charles legacy is one that should be celebrated,” says Sarah O’Byrne, Chair, St. Joseph’s Villa Foundation Board of Directors. “Everyone in our community has been touched by his generosity in one way or another. And that will live on forever.”