#VillaHeroes: Daisy Provido, taking a chance to follow her dream 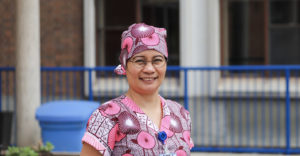 #VillaHeroes: Daisy Provido, taking a chance to follow her dream

Meet Daisy Provido, a Personal Support Worker (PSW) at St. Joseph’s Villa. She was hired at the Villa in 2015, seven years after obtaining her PSW certification, and has been with the Villa ever since. It has become her second home and one of the centrepieces of her life.

But her path to the Villa hasn’t been all that linear. It’s a product of bravery, trusting her gut and serendipity.

Her journey began over 13,000 kilometres away in her hometown of Capiz, Philippines. Growing up with a large family in the Philippines, she learned what it meant to take care of others.

“There were no long-term care homes in the Philippines, so it was part of our culture to take care of the elders,” Daisy explains. “I grew up taking care of my grandmother, who lived to 105. So, caring for others has always been part of my life.”

By the time she was 23, she had taken the first step towards her career aspirations by moving to Hong Kong to be a nanny. She didn’t spend too long in Hong Kong before taking a leap of faith and moving to Canada, securing work as a live-in nanny in Guelph, Ontario.

“Moving to Canada was quite scary,” Daisy admits through a smile. “I had work lined up nannying in Guelph, but I didn’t know anyone else here. I just had a feeling that taking the chance would lead to good things and looking back, I’m happy I trusted my instinct.”

‘A gift from God’

Making the move was immediately filled with serendipitous moments, from the kindness of a stranger at the airport who lent her change, to the amazing family she lived with in Guelph, to the chance encounter that she can only describe as a gift from God.

“I took the Go Bus to downtown Hamilton for an appointment,” Daisy reminisces. “On my way out of the appointment, I crossed paths with a friend I had known in Hong Kong. We caught up and she invited me to dinner at her church that evening. I was so tired and wanted to get home, but I decided ‘what the heck, why not?’”

Daisy ended up spending the night reuniting with her friend and meeting new people who belonged to the church, who would later convince her to accept a new nannying gig in Hamilton.

She would eventually double up her nannying schedule by enrolling in further education to become a certified PSW. She nannied from Monday to Friday, spent Saturday catching up on school and worked at the church on Sundays.

“It was pretty hectic. But I knew the hard work would be worth it when I’d finally be able to provide care in a long-term care home.”

‘It was all meant to be’

Since arriving at St. Joseph’s Villa, Daisy has made many friends with residents and staff, and considers them her second family here in Canada. Working in long-term care doesn’t feel like work to her, it’s something that she loves and was called to do.

“The Villa feels like my home. It’s like it was all meant to be. I’ve never felt as comfortable as I have here, from the residents I care for to the people I work with.”

And though the past year has challenged her work environment, she feels privileged to be on the frontlines of the pandemic caring for the most vulnerable populations and supporting a family of her own.

As a loving wife and mother of two, she believes the essence of life is to provide the warm love and care that people deserve. She is inspired every day by her son and daughter, and hopes that one day she will inspire them to follow their own dreams.

With such an amazing role model as their mother, we have no doubt that they will.