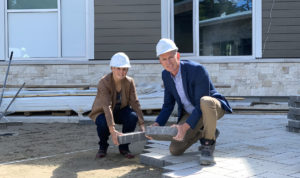 ‘It wasn’t if we were going to make it work, but how.’

In 2016, Maureen Ellis, President & CEO of St. Joseph’s Villa Foundation, was approached with an inspiring request for support that would greatly expand the Villa’s scope of care to our community. St. Joseph’s Health System was in the planning stages of a hospice to serve West Hamilton and surrounding areas, and they believed the Villa campus, nesting on the edge of the Spring Creek Ravine, was the perfect location.

Time was of the essence as the Villa Foundation Board had just a matter of weeks to commit to fundraising for the hospice build and support ongoing operations. The idea of expanding the Villa campus to hospice care was exciting, but there was no question this was a big commitment. Raising capital and annual operational funds is no easy feat, especially not for a small team like the Villa Foundation, which already supports one of the largest long-term care facilities in the province.

“I immediately fell in love with the idea of a hospice on our campus,” says Maureen. “It aligned perfectly with the Sisters of St. Joseph’s mission to provide compassionate care for everyone in our community. This was another way to extend our care.”

Though her intuition told her they could make this work, Maureen needed to discuss it with the Foundation Board. “It was important to me that no matter what, our support to long-term care would never waiver if we took on the hospice. And this became an area of focus in the decision making.”
–

The Case for Support

Maureen brought the opportunity to David Weber, who chaired the Foundation Board at the time, for further discussion.

“We were given a very short window of time to commit,” says David. “We were confident our donors would be touched by the idea of bringing hospice care to the Villa. We also knew if there was any community where this could be done, it would be in a town with such a strong community like Dundas.”

The Foundation team hit the ground running. The project was brought to a handful of select donors who didn’t need much convincing. A project of this magnitude just made sense and they were proud to support any way they could to make the vision a reality.

“Our major donors got behind the project immediately,” says Maureen. “This is something that our campus and community needed. It wasn’t an if we’re going to make it work, but how.”

Preliminary research revealed that the demand for hospice care and support for families exceeded the supply of beds available in a community. These existing hospices needed expansion to create space to provide those services. It was clear that building a six-bed hospice did not meet our community’s end-of-life care needs. A revised vision and plan were needed.

Along with increased support from leadership donors, the board and staff took a “leap of faith,” making a courageous decision to build what was needed and not what was easy – a ten-bed hospice with space for onsite programs and services.  This decision was made without knowing whether the Ministry would approve funding to operate the additional four beds.  It would take an unprecedented $13 million to achieve – more than any other fundraising campaign for Hospice.
–

In June 2019, with the Gift of Love campaign quickly nearing its goal, Maureen Ellis retired from her role as President & CEO of the Foundation after 37 years of service. A change in leadership during a major campaign had to be seamless.  It was important for Maureen and the Board that her successor would hold the same passion and commitment to St. Joseph’s Villa. Having been an integral player in launching the Gift of Love Campaign in the fall of 2017, Don Davidson was appointed the new President & CEO.

The Foundation met the ambitious goal in the fall of 2020 thanks to the collective generosity of our community and the leadership of Bishop Douglas Crosby and Dino Trevisani. Despite being retired, Maureen remains involved with the vision of Margaret’s Place Hospice.

“We are a small foundation, yet we have a history of exceeding every goal we take on,” says Don. “We are fortunate to live in one of the most caring, compassionate and generous communities in Ontario. Meeting and exceeding our goal to build Margaret’s Place will be their legacy. I am in awe of what this community has achieved.”

And for the Foundation team, it was a matter of doing what was right to advance care and provide for the community.

“We always think back to the Sisters of St. Joseph and ask ourselves, ‘what would the Sisters do?’” says Don. “They would have made the same decision to move this vital project forward because it’s the right thing to do for our community.”

Now, almost five years later, we’re looking at a fully-finished hospice exceeding anything we had ever dreamed possible.  And it’s all thanks to you… the donors and community who have supported our campus of care for many years and recognize the importance of the care we provide.

As we prepare to celebrate and open Margaret’s Place Hospice at St. Joseph’s Villa to patients and their families, we turn our attention to raising the annual operating funds required to ensure the best possible care.  Whether $5 or $5 million, every gift matters.

As one of our leadership donors said at our first meeting – Hospice is about “caring,” not “curing.”
–

–Because of you, we have a Campus of Care! Your support goes toward making St. Joseph’s Villa a better place for residents and their families, providing the necessary programs and services to enrich their lives. Give a Gift of Care today!

GIVE YOUR GIFT OF CARE

The “magic” happens when we bring opportunities, caring people and donors together!