#CommunityOfCare: A legacy of compassionate philanthropy

#CommunityOfCare: A legacy of compassionate philanthropy
– 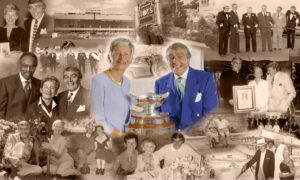 A glimpse of Margaret and Charlie Juravinski’s legacy

–
‘A place for all Margarets and anyone else who needs hospice care.’

Margaret’s Place Hospice was made possible through the power of community and the support of a grand vision. Margaret and Charles Juravinski are of the many who supported the idea of hospice throughout its entire journey. Their generous contribution of $2.8-million enabled St. Joseph’s Villa & Foundation to confidently pursue the expansion of our care. Because of their support, the hospice is named in their honour.

Over the past 25 years, Margaret and Charles have etched a legacy of health care philanthropy in Hamilton. Having donated and endowed over $150-million to health care initiatives in the area, they have made paying it forward the core of who they are. And what better way to do so than through such a universal need.

“The support of our community has given us everything we have today,” says Charles. “We made it our mission to give back to the community have who supported us, and we’ve found great joy in seeing the impact it’s made on people’s lives over the years.”

Their relationship with St. Joseph’s Villa dates back to 1988 when Margaret’s mother became a resident of the Villa. In her ten years of living at the Villa, Margaret and Charles realized the importance of long-term care and the financial struggles to fund it. In appreciation for the care Margaret’s mother received, they supported the redevelopment of St. Joseph’s Villa in 2002 with a $5-million gift – the largest gift ever made to a long-term care facility in Ontario at the time.

Since then, Margaret and Charles remained in touch with the people at St. Joseph’s Villa & Foundation while they made ripples in the Hamilton health care community through their philanthropic efforts. And now, nearly 20 years later, the Juravinskis have yet again played a pivotal role in our community by setting a new standard of hospice care through their commitment to Margaret’s Place Hospice.
–

Over a dinner in 2016, Maureen Ellis of St. Joseph’s Villa Foundation, brought the idea of hospice to Margaret and Charles to gauge their interest. Their excitement was apparent. Only weeks earlier, Margaret and Charles had a conversation about the need for a hospice in the West end of Hamilton. The universe had listened, and it was an opportunity they felt was their calling. They initially committed $1-million, but when St. Joseph’s Villa re-envisioned the hospice from six beds to ten with community outreach, they happily doubled their gift. This was followed with a gift match challenge to the community with a $700,000 gift and another $100,000 to care for when the hospice opens its doors to the community.

“For a family to have a haven where they can be together for precious moments together and journey together in their final days, I couldn’t think of any better way to give back to our wonderful community,” says Charles.

It was their gracious and leading support that made hospice care possible, and it was only right to name it in their honour. And as Charlie beautifully put it…

“The hospice is named after my wife Margaret,
but it’s a place for all Margarets and anyone else who needs it.”

–Because of you, we have a Campus of Care! Your support goes toward making St. Joseph’s Villa a better place for residents and their families, providing the necessary programs and services to enrich their lives. Give a Gift of Care today!

GIVE YOUR GIFT OF CARE